The water gun has been a staple toy for many children across the world for decades, but you may be surprised to learn how old that type of plaything really is.

Rifles that were turned into water-firing weapons were used way back in 1778. Then, in 1861, William Tecumseh Sherman, a man who served as general for the Union Army during the Civil War, made mention of something known as a “squirt gun.” Still, it’s hard to think those as the ancestors of the toy water guns on the market now. 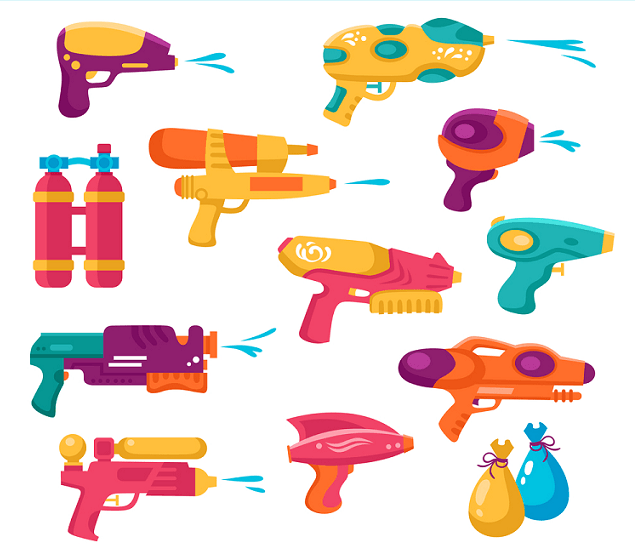 It wasn’t until former NASA engineer Lonnie Johnson released his first model of the Super Soaker in 1989 that people finally saw the true potential of this particular type of toy. Since then, the water gun has continued to evolve. Several types of water guns are now also available to be purchased for those looking to cool off while having fun.

Taking a Closer Look at the Different Types of Water Guns

As mentioned earlier, it took someone who formerly worked at NASA to come up with the Super Soaker and when you dive deeper into what this toy is all about, you begin to appreciate the brilliance of its design.

Before Johnson released the first Super Soaker decades ago, the water guns that were in use could only fire off short and weak streams of liquid. The Super Soaker changed things up by adding compressed air into the equation. With the aid of compressed air, it suddenly became possible for people to unleash powerful streams of water while they were playing.

Users of the earlier Super Soakers would need to pump air into the reservoir contained within the toy to produce a forceful blast of water. The models of today are much more varied. Some even call on users to pump water if they want to create a powerful stream.

It’s hard to tell what kind of squirt guns were available back in the Civil War days. However, we can still look back to the years before the advent of the Super Soaker to appreciate the simple yet smart design of the squirt gun.

You can easily picture the appearance of the squirt gun in your head. It’s that small toy that usually comes in one of several bright colors and when you pull on its plastic trigger, you release a stream of water that can soak a nearby target.

Of course, the key word there is “nearby.” The early squirt guns are notorious for lacking power. You’d have to constantly refill this toy if you wanted to play with it for an entire afternoon.

Still, no matter how flawed it may appear now especially compared to modern water guns, there was a time not too long ago when this was the toy every kid wanted.

The Water Guns Designed for Adults

There’s this ongoing trend of old school toys being updated and subsequently marketed to a new audience. Interestingly enough, that new audience is not made up of younger kids.

Instead, adults who played with those toys when they were younger are the ones included inthe target demographic for those modernized toys.

As evidence of that, check out some water guns designed in recent years that are clearly meant to be sold to parents instead of their kids.

You can currently see all kinds of water guns designed for adults on the market these days. One model features an ice chamber so that it can constantly fire off the cold water, while another water gun is hooked up to a small helicopter. Adults can even get a champagne gun if they so desire.

The Water Guns Designed for Kids

The adults aren’t the only ones getting the fun toys. While the modernized water guns designed for kids aren’t as elaborate as the models being made available to adults, they are still considerable improvements over the options that were on the market not too long ago.

To get a better idea of how water guns for kids have been updated for today, you can check out this offering from HIG. As you can see, it features a sleek design and it’s also made using environmentally-friendly materials.

You should also take a look at the Water Launcher Gun from Stream Machine. What makes this particular water gun so special is that it is capable of launching water up to 70 feet.

If you want your kid playing outdoors, it may be a good idea to get him or her one of these newer water guns.

If you’re on the market for a new Super Soaker, then you’ll likely stumble upon one of the many products that are being sold under the Nerf Super Soaker brand.

According to Fandom, the Nerf lineup of Super Soakers began in 2011. Since then, a bunch of models has made it to the market and they come in different forms.

Some of those Nerf Super Soakers even look like they were ripped right out of a science-fiction movie. There are also models that closely resemble handguns while others look like bazookas. Many of the models feature the same dark blue, orange, and white color scheme, though there are other color options to choose from as well.

You can also get accessories along with the Nerf Super Soakers if you want to properly prepare your child for the upcoming water gun wars.

Water blasters function much in the same way as water guns, although many of them typically come with longer barrels.

It’s usually easier to play around with these water blasters. That’s due in large part to them being comfortable to hold in your hands and rest on your shoulders. Their pumps can also be operated in quick succession.

Examples of water blasters that are available today include these items from JOYIN as well as this stylish Toysery creation.

As you can see, the water gun that you had so much fun playing around with when you were a child has not disappeared. You can even argue that it’s been vastly improved upon, with modern technology working to give these toys additional features and greater capabilities.

If you’re feeling nostalgic and want to spend a summer afternoon playing around in your yard with water guns, you can also do that thanks to some of the options that are currently on the market.

Water guns have been around for a remarkably long period of time and they likely aren’t going away anytime soon.